Daniele Menghini, winner of the competition for the direction project, will bring to Teatro Sociale Como, and to every Italian and European theatre connected to the Opera domani circuit, one of the most famous and beloved fairy tales. In Rossini’s version, surprisingly, we are not dealing with a proper fairy tale, since the composer and his librettist Ferretti purge the story of all magical and fairy-tale elements: there are no mice that turn into coachmen, no pumpkin that turns into a carriage, no fairy godmother and not even the glass slipper. Our story takes place in a Grand Hotel: a melting pot of different cultures and social classes, a dimension that makes exchange and encounter a richness, a special place where an illustrious guest such as a prince can meet and fall in love with a maid, recognising the true beauty hidden behind a dirty apron.

The father and head of the family, Don Magnifico, who is broke after squandering all of Cinderella’s inheritance on his daughters’ whims, turns his palace into a Grand Hotel in the hope of improving the house’s finances. Carving out the role of concierge for himself, he forces Cinderella to wear the clothes of a maid and makes her his servant, allowing his daughters Clorinda and Thisbe to live as eternal vacationers, served and revered by their poor stepsister. One fine day, the unexpected visit of a special guest will change the fate of the mistreated girl: Prince Ramiro himself, accompanied by the waiter Dandini, has chosen the famous Salon of Delights of the Grand Hotel to hold a grand ball and thus marry the girl with the purest heart in the whole kingdom. Cinderella’s goodness will win the prince’s heart, with the help of the good Alidoro, the pony express of dreams, who rides the length and breadth of the kingdom, fulfilling the wishes of kind hearts. 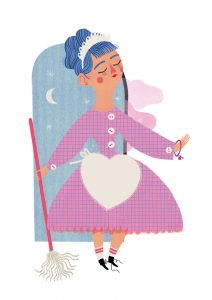 EDUCATIONAL THEMES from opera to adaptation

The opera adaptation, lasting about 70 minutes, is introduced by teacher training, officially recognised by the Italian Ministry of Education, and, upon request, by an in-classroom meeting.
Students can prepare to the active participation in the play thanks to an interactive opera libretto, which is differenciated for primary and secondary schools.

For more information on the next workshops and shows, please visit the Italian page.

This website uses cookies to improve your experience while you navigate through the website. Out of these, the cookies that are categorized as necessary are stored on your browser as they are essential for the working of basic functionalities of the website. We also use third-party cookies that help us analyze and understand how you use this website. These cookies will be stored in your browser only with your consent. You also have the option to opt-out of these cookies. But opting out of some of these cookies may affect your browsing experience.
Necessary Always Enabled

Performance cookies are used to understand and analyze the key performance indexes of the website which helps in delivering a better user experience for the visitors.

Analytical cookies are used to understand how visitors interact with the website. These cookies help provide information on metrics the number of visitors, bounce rate, traffic source, etc.

Advertisement cookies are used to provide visitors with relevant ads and marketing campaigns. These cookies track visitors across websites and collect information to provide customized ads.

Other uncategorized cookies are those that are being analyzed and have not been classified into a category as yet.